Ghanaian presenter and former Public Relations Officer for Charter House George Quaye has opined that the negative criticism of the statement issued by the CEO of Charter House Mrs Theresa Ayaode is unfair and uncalled for.

Speaking in an interview on Hitz FM’s Daybreak Hitz show hosted by Andy Dosty, he disclosed that whatever the lady said was not wrong that rather she was trying to find solutions to the unfortunate event that took place at 2019 VGMA.

“I am not speaking as a former PR of Charter House but as a member of this industry. The woman used the right word in the right context and lot of stake holders were invited to jaw to jaw to find solutions for the VGMAs. Everybody present there kept speaking about Shatta Wale and Stonebwoy ban and it became an argument for about an hour that’s why she said let’s rise above everything that happened and find lasting solutions to make Charter House a better event house”, he divulged.

He added that whatever the lady said at the interaction, that a few people were privileged to attend should stop cutting portions of the statement to make it seem as if someone hates any of these two artistes instead let’s help these two great arts to finish whatever punishment they have been given and hope for the day they will be called back. 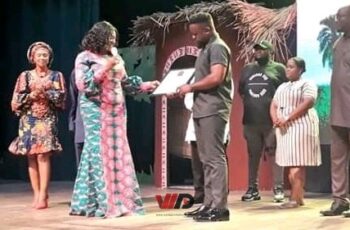