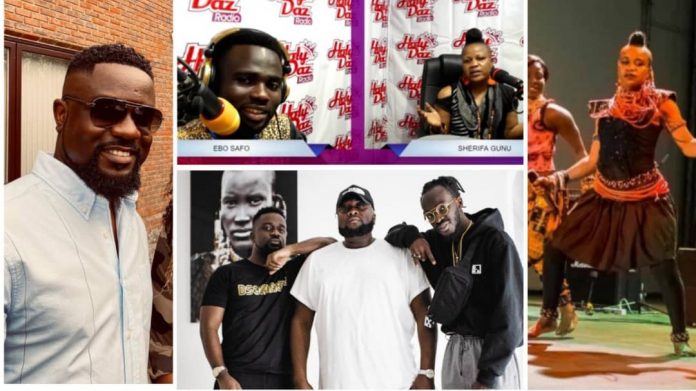 Dope and prolific Ghanaian female singer, who hails from the Northern Region of Ghana, widely known with her Showbiz name as Sharifa Gunu, has made a revelation to the world, of how Ghanaian heavyweight Rap Champion and Sarkcess Music Label boss Sarkodie, really showed her deep love when she once called on him, to feature on her new song she is ready to get it released soon.

Speaking in a one on one Interview with renowned Radio and TV Personality Ebo Safo live on Holy Daz Online Radio show dubbed ‘Celebrity Vibez hour’, the female singer Sharifa made it clear, it’s about time the government of Ghana, gives a solid support to the Entertainment Industry, due to the fact that, artistes are going through lot of difficulties affecting their music to be pushed harder to the entire world.

When asked by the host how she was able to collaborate with Sarkodie after recording with him nine years ago on Sarkodie’s song titled ‘Sharifa’, the female songstress made it known that she was very surprised how Sarkodie reacted to her when she called on him for a Collaboration.

” I called Sarkodie for a feature on my new song, and he told me to send the beat to him. Afterwards, he called me back to demand for the contact of the Music Engineer whom I did. ”

She continued, “Sarkodie called me the next day that he is ready at a place waiting for me to move to the studio with her, I joined him to the studio, recorded with me at the studio without any charge, and even gave me Ghc 200 for my transport”, Sharifa said.

She made it known that, if you are not closer to someone, people may have different perceptions about the person, but with Sarkodie, he is deep, has a very soft heart towards people and down to earth.

Sharifa Gunu is now out with her new song titled, “The world is Sick “, and ready to get the video released in a few days time.
Click on the link below to check out the full Interview of Sherifa Gunu: