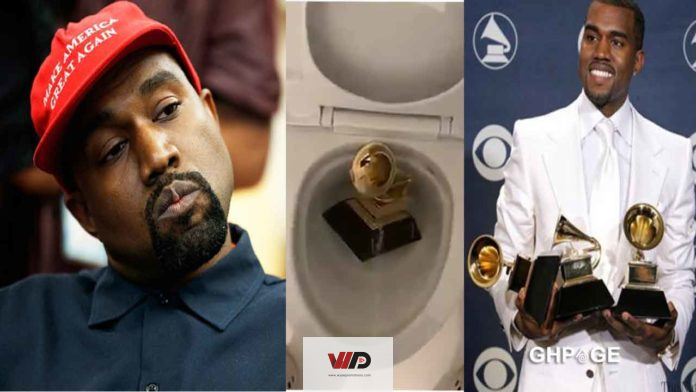 American rapper turned preacher Kanye West is trending on Twitter after posting a video of himself urinating on his Grammy Award which he dropped in the closet.

In the footage shared, Kanye West ‘goes into battle’ against labels Universal and Sony to try and retrieve the rights to his own music.

Captioning the video, he wrote; ‘Trust me… I WON’T STOP,’. He referred to his current bid to gain ownership of his masters otherwise known as the copyright to his original songs.

This is one of the 21 Grammy awards won by the artiste. After the video surfaced, there have been several reactions on Twitter.

Many believe he may be suffering from bipolar or other mental dysfunction which is pushing him to do and say the absurd.

The rapper is enraged that most artists do not own their masters (the rights to their own work), and has been savaging the structure of the music industry.

He has vowed not to make new music until he owns his own masters and is freed from various contracts he has signed over the years.